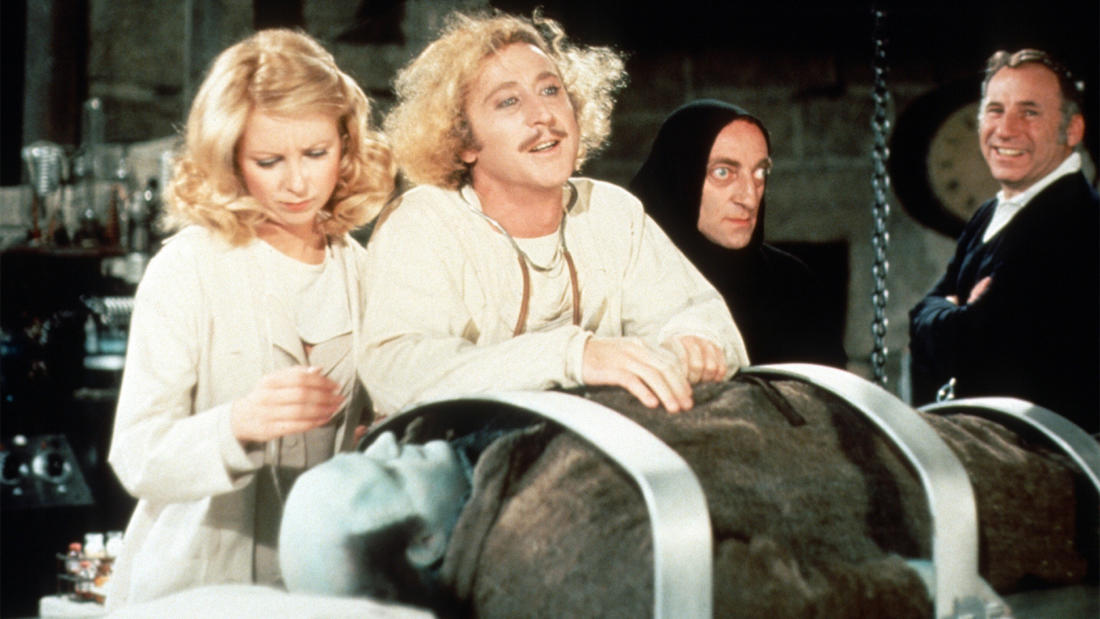 A program pairing Mel Brooks’s hilarious reimagining of the Frankenstein legend with a presentation on bioelectricity by a developmental biologist. Together with her colleagues, this scientist is taking a centuries-old concept—bioelectricity—in exciting new directions.

The speaker combined humor and serious science in her presentation, Frankenstein’s Legacy: Bioelectricity’s Bad Reputation and Why It Is Time to Reexamine the Besmirched Research. Beginning with a look at 18th-century experiments in animal electricity that served as the foundation for reanimating a corpse in Mary Shelley’s classic novel Frankenstein, she went on to discuss how today’s scientists are harnessing the bioelectrical potential of cells for regeneration in frogs, worms, and other creatures. In the future, their pioneering scientific techniques may be used to regenerate organs, limbs, and tissues in humans.

Life! Do you hear me? Give my creation...life!

Director Mel Brooks spins the Frankenstein legend into comic gold in this inspired parody of 1930s Universal horror classics. Gene Wilder stars as young neurosurgeon Frederick Frankenstein, who has spent his entire life trying to live down his family’s reputation by altering the pronunciation of his name (“That’s Fronkensteen”) and rejecting his grandfather’s infamous experiments in the reanimation of dead tissue. But when he is forced to visit the family castle in Transylvania and discovers granddad’s lab journal (“How I Did It” by Victor Frankenstein), he embraces his destiny: to succeed where his ancestor failed. With the help of a salvaged corpse, a purloined brain, and an electrical storm, Frederick creates his monster (Peter Boyle) and brings him to life – with hilariously unintended consequences.

Back in 1786, Italian scientist Luigi Galvani discovered that a frog’s severed leg muscles twitched whenever he touched a nerve with his electrostatically charged scalpel. Among those intrigued by his work in animal electricity was young author Mary Shelley, who used galvanism — the idea that electricity could animate matter — as the basis for her novel Frankenstein. Other scientists expanded on Galvani’s work, but interest in electricity’s regenerative potential fell by the wayside for much of the twentieth century.

Today bioelectricity research is alive and well at the Tufts Center for Regenerative and Developmental Biology, where Principal Investigator Dany S. Adams and her colleagues are studying how the natural electrical signals transmitted among cells help guide biological shape, and how these signals can be manipulated to generate specific organs and body parts. By tweaking bioelectric properties, Tufts researchers have prompted tadpoles to sprout new tails past the normal stage of regeneration and have produced all manner of odd creatures, including tadpoles with working eyes on their backs, four-headed flatworms, and frogs sprouting toes at the site of an amputated leg. Applied to humans, these techniques could one day be used to regenerate lost limbs and damaged tissue, replace organs, and repair birth defects.

Dany Adams is fascinated by the biological process (called morphogenesis) that causes an organism to take shape during its growth from embryo to adult. Having studied the biomechanical aspects of animal development in graduate school, she now focuses on investigating how the electrical signals generated by cells help initiate and guide facial formation and limb regeneration.