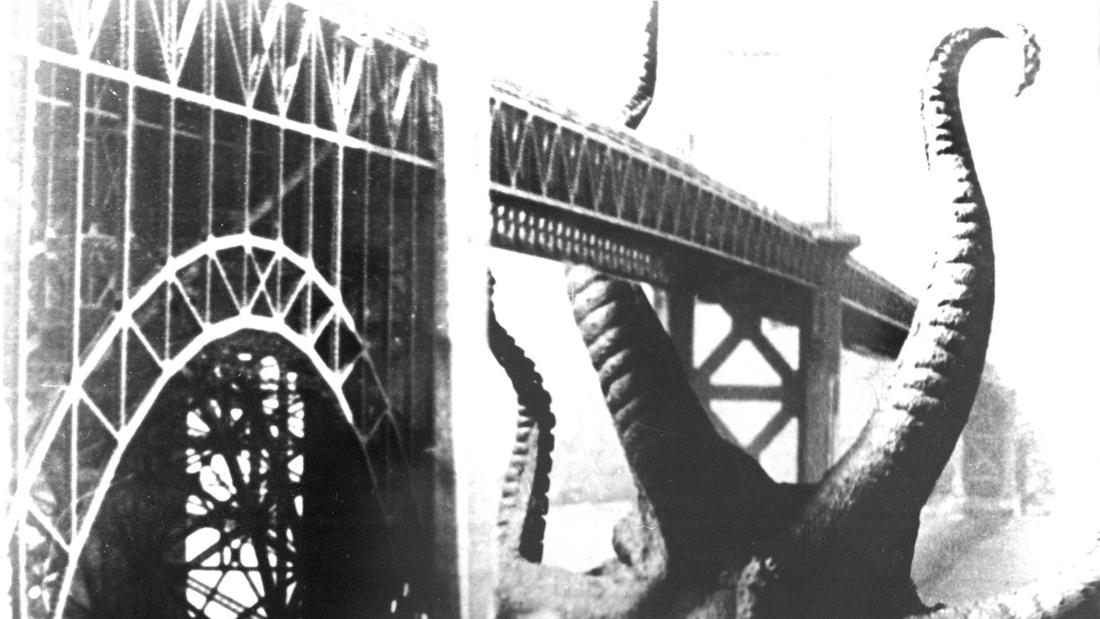 Professor of Organismal Biology and Anatomy, University of Chicago

Professor LaBarbera discussed the biological implications of really big and really small B-movie creatures, focusing on the massive cephalopod in It Came from Beneath the Sea, one of his all-time favorite B’s.

A giant octopus, whose feeding habits have been affected by radiation from H-Bomb tests, rises from the Mindanao Deep to terrorize the California Coast.

A gigantic (albeit six-armed) octopus from the greatest depths of the sea is galvanized into action when radiation from H-bomb testing in the Pacific affects its normal feeding habits. An atomic submarine captain (Kenneth Tobey) teams with a pair of scientists (Faith Domergue, Donald Curtis) to stop the monster before it terrorizes major coastal cities. But after snacking on a couple of freighters and scooping up some tasty landlubbers from a beach, the enraged sea beast manages to make its way to San Francisco, where it demolishes the Golden Gate Bridge and the Ferry Building, thwacks a helicopter out of the sky, and sweeps an enormous tentacle through Market Street, before a final showdown. Featuring stop-motion animation by special effects master Ray Harryhausen, this sci-fi adventure is a classic of the Golden Age of monster movies.

Dr. Michael LaBarbera teaches biology and biomechanics at the University of Chicago, where he is a professor in the Department of Organismal Biology & Anatomy and the Committee on Evolutionary Biology. He is a fellow of the American Association for the Advancement of Science, an associate editor of The Biological Bulletin, and served on the Board of Reviewing Editors of Science for 11 years. Professor LaBarbera has published on everything from the biomechanics of marine invertebrates to why animals don't have wheels to the aerodynamics of flying snakes. He has lectured to non-scientist/general public audiences in over 30 US cities and has appeared on many radio and television shows.